WFLA & EWFC Enter Into A Partnership

The partnership announcement is HERE

The WFLA are delighted to announce that well respected referee and trainer Mick Hill has agreed to join the WFLA as Referees Development Officer.

A new FA affiliated walking football league is being set up in Cheshire. Any teams interested in joining please contact Chris Barrow – chris.barrow@cheshirefa.com

The Walking Football Leagues Alliance held their Champions Cup at the Leek Town FC ground on Saturday 11th June. The tournament was sanctioned by the Staffordshire FA. Once again some excellent football was played by some very strong teams. Thanks to all who travelled and attended and also to our excellent referees, not forgetting the excellent staff at Leek Town FC. 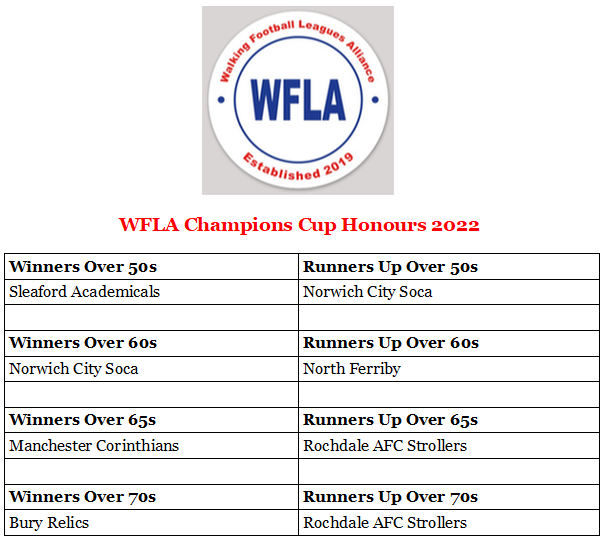 Some excellent football played yesterday 28.05.22 at the inaugural WFLA Inter League Cup at the Leek Town FC ground. Thanks to all who attended and our excellent referees. 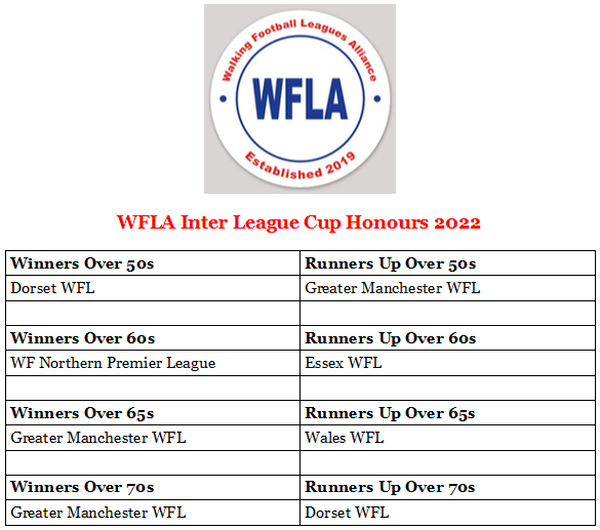 The Walking Football Leagues Alliance was formed in 2019. Currently there are 17 member leagues.

The WFLA is a free to join, non-political, independent support network whose aims are to help establish, promote, and support FA affiliated walking football leagues and to encourage the growth of grassroots competitive walking football in safe environments. All WFLA national and local tournaments are all sanctioned by local FA’s, which sit under the rules and regulations of the Football Association.

Free membership is open to the organisers of any local or National FA affiliated walking football league.

If your league qualifies for membership please contact us on https://wfla.uk/contact-us/

The WFLA is run by a volunteer Alliance Management Committee drawn from member leagues. Currently the WFLA represents over 300 teams.

The Surrey FA WFL are delighted to join the WFLA. We are keen to learn from the other leagues as we develop this great new sport, to create new friendships within our league as we start a rep side involving players from different clubs, to create partnerships and regular matches with other leagues as well as enter the WFLA competitions where possible.

Our League aim is to provide safe, fun, friendly, well organized walking football to help the health, well-being and fitness of all participants.

The Birmingham County WFL are delighted to be joining the WFLA. It has always been our wish to link up with other like minded Leagues, to share experiences and knowledge. We are looking forward to some friendly competition with other member Leagues.

The Sheffield & Hallamshire County FA Walking Football Flexi League joined the WFLA to seek further good practice across walking football initiatives and leagues, as we are looking to adapt or add to our current flexi offer with a more centralized league format following feedback from teams and participants.

We would also like to use this platform to showcase the current opportunity in our county and potentially recruit further teams to the competition.

The Lincolnshire FA Walking Football League is proud to announce it’s affiliation to the Walking Football Leagues Alliance. This online platform allows the league to work alongside likeminded people & organisations in order to provide the best possible playing environment for members of the local walking football community. We are excited to engage with, and learn from, all members of the Alliance to develop, strengthen and unite walking football across the country.

Developing and launching a league in Wiltshire has been fundamental to the overall growth of walking football across the county. Some of our clubs have played league football outside the county for a while so bringing everyone together within the county was vital. We are looking to see this whole league structure develop and the evolution of the WFLA fits well with how we see this progression and will hopefully provide an excellent forum to enhance the game.

We have organised 6/7 a side leagues since 1997, it seems fitting that we will now be able to offer the great game of walking football in what will soon be our 25th year.

The WFLA and its member leagues are a credit to the sport and we feel honoured to be involved with organisations/people who obviously care passionately for their sport and local community. We look forward with optimism and excitement as we aim to emulate them and provide our own local community with the same opportunity to play walking football in a safe, friendly yet competitive league environment.

Our league motto is: “Participate, enjoy and respect the beautiful game”

The Wales Walking Football National League is delighted to have the opportunity to join our friends in the Walking Football Leagues Alliance. Our first season was in 2019, with friendly competition for teams from across Wales. Our second season has started in 2020, but it has been put on hold as a result of the current nationwide (indeed worldwide) Coronavirus restrictions. Of course we hope to complete 2020 fixtures later in the year.

When we are able to move on from the current restrictions, we hope that we will continue to make more friends in the walking football family, to share knowledge and experiences with walking football leagues in England, and to provide more opportunities for clubs and players to play walking football in a competitive but friendly environment.

The Walking Football Northern Premier League are pleased to announce that we are now members of the Walking Football Leagues Alliance. The Alliance provides a great opportunity to learn from and, if needed, to assist our fellow leagues up and down the country.

The Essex Walking Football League one of the largest walking football leagues in the UK, are proud to announce their involvement in the newly formed Walking Football Leagues Alliance. The alliance promises to be a positive and constructive organisation enabling a platform for leagues to share problems, solutions, thoughts, ideas, procedures, resources and of course mutual respect and cooperation going forward.

We are progressive and forward thinking, embracing new ways in which we can improve and deliver the best service to our clubs. We will promote inclusivity and eliminate all forms of discrimination and focus our attention on our Clubs and their needs. We are also committed to learning in order to further the development of the League.

Working for the benefit of our members and the whole community by delivering the highest standards of service for walking football in the Peterborough Area.

The established Hereford FA Walking Football League now in our 5th season are pleased to announce our involvement in the new WFLA alliance. We are always looking at ways to grow and promote Walking Football and we are looking forward to working in co-operation with other leagues to achieve this goal.

Joining the WFLA for me was a no brainer. I did speak to The FA down in Wembley before agreeing to join up so that there wasn’t going to be any conflict, The FA’s take on it was it wasn’t going to do any harm if Herefordshire FA Walking Football League joined the Alliance. The key factor for me joining was that WFLA isn’t political and the only people to benefit are the players/teams. With smaller Counties its always trickier to promote and gain interest so by having this platform, for me personally, it can only be a good thing to help Walking Football to continue to grow in Herefordshire.